This update is overdue, but for the most part, it’s safe to assume that no news is good news at this point.  To that point, I’ll get right to it: I’m cancer free.

I had a PET scan last week and, to quote the radiologist’s report, “there was minimal uptake at the periphery of the mediastinum,” but nothing lighting up in a way that would indicate relapse.  Translation: Everything is looking good.  The activity at the periphery of the mediastinum is common in patients that have received radiation therapy (which I have) and is no cause for concern.  I’ll have a full CT Scan in Feb/March, which will mark our next milestone on this journey back to full health.  Until then, I continue on the maintenance chemo regimen–a combination of daily, weekly, and monthly pills along with once-a-month IV infusions. 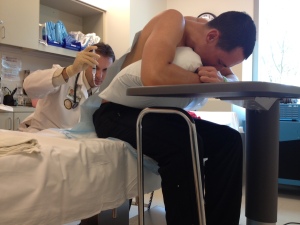 In November I had my eighth and final (God willing) dose of intrathecal chemotherapy.

One year ago this week (December 4th, 2011) I was in the ER with back pain and breathing problems.  An X-ray revealed an unidentified mass in my chest, between my heart and lung. Four days later, on December 8th, I was officially diagnosed with stage IV lymphoma/leukemia.  As we approach the one year anniversary of my diagnosis, I’ve been awash in a variety of not-so-pleasant memories.  It’s crazy to think that it was only twelve months ago that this whole chapter of my life began.

For better or worse, 2012 has been a year in which I enjoyed the full human experience.  The emotional highs and lows, physical ups and downs, sunshine and rain, constant change and utter impermanence of this human experience.  I got my money’s worth in 2012, that’s for sure.  I didn’t have a choice!  And, as terrible as it was, in my darkest days, when I wondered ‘why me?’; when time stood still; when it seemed things would be easier if I just died; when it felt like I was living a nightmare; as bad as it was at its worst, when I look back on 2012, I have just as many pleasant memories.  Well, maybe not ‘just as many’…but a lot!

I am, and will be forever grateful to those of you who have reached out to me in this past year with emails, text messages, phone calls, greeting cards, words of encouragement, prayers, positive thoughts–even those of you who have just followed the blog–it all makes a difference.  And I’m not just speaking for myself, but for Natasha, and both of our families as well.  We have been overwhelmed by the love and support that we’ve felt over the past year.

I’ve learned a lot in 2012.  About myself, about life.  More than I can share, or than you would care to read.  But, if I had to narrow it down to just one thing, there is a tired cliche that I find myself repeating: Life is short.

It doesn’t matter how long we live.  How much time is enough time with the people we love?  I mean, we all have our arguments, and petty beef, but when it comes right down to it, what is more important than the time spent with friends and family?  A wise man once said, a great bottle of wine is best shared.

So, I guess I’d like to propose a holiday toast: To life’s ups and downs, and to the friends who we’re so lucky to have beside us on this wild and crazy (and short) ride we call life.  Happy and healthy holidays.