It’s been four years, three months, and eleven days since my last update – and my last dose of chemo.

And six years, eleven months, and twenty-six days since I first checked myself into the E.R., on the night of my 29th birthday, having difficulty breathing.

I didn’t know it at the time, but my life was about to take a turn.

Almost seven years, and a few plot twists later, I have so much to be thankful for. I’m healthy and happy; a husband and a father; and 100% cancer-free. 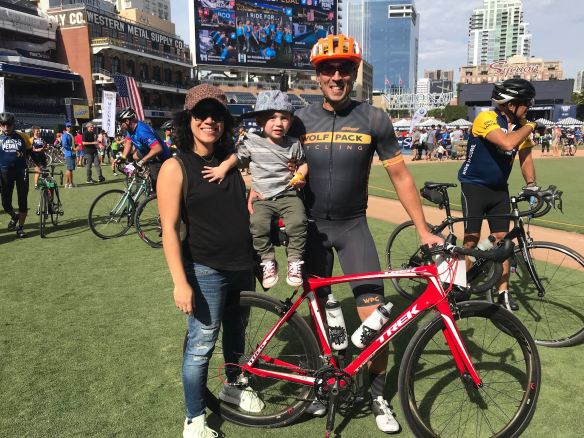 I’ve got a lot to be thankful for

Natasha and I were blessed with a son, Jasper James Wagner, on December 29th, 2016. I could fill an entirely different blog with reflections on fatherhood, and he’s not even two yet. We are fully embracing the challenge, and are grateful for the love and support we’ve received as rookie parents from friends and family – especially his grandparents Mory and Sarah, Jim and Marlene. Baby sister is due in March of next year (!!).

This past summer, I left my in-agency position to begin working for myself as an independent brand/communications strategist. It’s early days, but the response so far has been encouraging. Launching my site (BRIGHTN.CO) and landing my first paid projects were big recent milestones.

This past weekend I rode my bike (along with nearly a dozen of my teammates from Wolfpack Cycling) in the #PadresPedal, a charity cycling event benefiting Moore’s Cancer Center at UC San Diego, among other local cancer research and treatment facilities. Having spent nearly 3 years of my life in the care of UCSD’s cancer team, it’s a cause that’s personally meaningful to me.

As the ride was about to start, I realized I forgot to fill out my card. Of course, I was riding for myself, I thought. But somewhere out on the course, as I reflected on my journey, I had a realization:

As difficult as my experience was for me personally, I can say with 100% confidence that it was even harder on my family. And, I would guess that most survivors would say the same: That a disproportionate share of the burden of a cancer diagnosis and subsequent treatment, falls not on patients themselves, but on family members and caretakers.

So that’s what I decided, mid-ride. That I would ride for the caretakers. Not just my caretakers but for all of the caretakers, who shoulder the burden right alongside their friends and loved ones, everyday.

It was a fairly long ride, and after a few hours of this idea bouncing around in my head, I was feeling a bit emotional as I approached the finish. And who was waiting to greet me? My biggest fans, and my own personal cheering section. The two most important people in my life. It was a great finish to a great ride, and a welcome opportunity to give thanks.

Wherever you are, and wherever you’re celebrating this Thanksgiving, I hope it’s a great one. Don’t forget to tell your own caretakers how much you love and appreciate them.

And, for anyone interested in supporting my fundraising efforts, you can contribute via my rider profile page here.